For the week of Nov 6th – 10th, the class went over going more into CSS, Flexbox, Git, and GitHub. While it was a good amount of new materials, the classes felt satisfying with seeing styling of websites come to look.

CSS was looked into from the traditional sense in how to set up columns and layouts. The traditional sense was setting up the structure of the design of a site with using display blocks float. This would require the CSS to be more tweaked around to get particular areas properly design through eyeballing and trial/error. The other way of setting up CSS was through Flexbox. Flexbox allows accommodating more for varies screen sizes for browsers and devices with most being supported. While CSS Flexbox is an alternative way to set a design structure, Flexbox allows controlling more parts of the design in something like alignment and sections instead smaller parts with using floats.

While going through setting up CSS with Flexbox, Kurt instructed the class to make a new website and to exercise what was went over with Flexbox. For the period of time, I focused on having particular color schemes themed for the website while keeping the code learned from what the class did with CSS Flexbox so far. With that in mind, I came up with Cyber Tokyo; a site designed to show few pictures from one my inspirations with colors and Photography, Liam Wong. Something to note with Cyber Tokyo, I had two different pictures for the main column the visitor is presented with upon visiting the site which is dependent on the browser size. 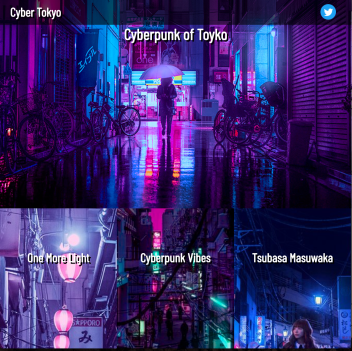 When it was time to ready up for the website to get online, the class had the opportunity to familiarize a little with how to use Git and GitHub through the use of the terminal.  With the terminal, uploading files to GitHub to have the site ready to be online is possible as Git is already installed on the macOS. Learning how to use parts of the terminal for typing for Git was a little challenging while it was very fun and great to see files being upload online without having to open up a browser. With learning to type in the terminal for Git came with new commands to remember what specific commands execute through the terminal. To start running Git through the terminal, the terminal would need to have Git initiated by typing git init. After that is typed into the terminal, there are various commands that execute different actions depending what the user is trying to accomplish. Below is the more commonly used Git commands Kurt had gone over during the lessons for how to setup Git and Github by using the terminal. (not in any particular order)

This sums up for the week of Nov 6th – 10th with what was learned with CSS, Flexbox, layouts, terminal, Git, and Github. Next week, the class was told we will start diving into Javascript.